Toronto Baseball Guys
Sunday, April 21, 2013
7-11... Not Very Convenient Alright, so the resurgence of the Blue Jays has not exactly come to fruition:

It's still just April, and there's still 90% of the season to go. That said, "It's early" can only placate a fanbase for so long. The win column has to start filling up at some point. Until then, here's a couple of fans' clever take on the Jays' early struggles.

Sunday, April 14, 2013
Looking Back on 2013 Now that the 2013 baseball season is behind us, we can reflect on what a tremendous year it was. The Mets surpised everyone, boasting both league MVP John Buck (.317, 6 HR, 19 RBI) and Cy Young winner Matt Harvey (3-0, 0.86), earning them a tie-breaker playoff with the Nationals to see who will face off against the Giants in the Wild Card play-in game.

The Braves cruised to the division title, joining St. Louis in the Central and the surprising Diamondbacks in the West.

The Tigers and Royals will meet in a 1-game playoff to decide the Central, just holding off the resurgent Indians and Cy Young winner Justin Masterson (3-0, 0.41). Meanwhile, Texas and Baltimore, led by MVP Chris Davis (.405, 6 HR, 19 RBI) meet in a rematch of last year's Wild Card play-in. Davis narrowly missed out on the triple crown, dropping the batting title to teammate Adam Jones.

All of these teams will be hard pressed to challenge the A's (9-3) and their .750 winning percentage.

Pundits were spot-on about the Yankees, who proved too old and broken down to make playoffs, while the revamped Blue Jays were a terrible disappointment, but not nearly as awful as the LA Angels, who played just .200 baseball and immediately fired everyone in their front office (out of a cannon). Rookie phenom Mike Trout struggled terribly his second time around the league, hitting a paltry .227.

Thankfully, the baseball season isn't just 10 games long. So everyone should take a step back from the ledge, turn off the bath water, unplug the toaster and just take a breath.

And yes, the Reyes injury sucks. A lot.

Sunday, March 31, 2013
Brett Lawrie and the Bench It was disappointing to hear that Brett Lawrie will start the season on the disabled list. After all, this is the shiniest new Jays lineup in quite a while, and it's a shame that it won't be at its shiniest right out of the gate. The growing body of Lawrie injuries start to make one wonder if he's headed for a Cam Neely/Wendel Clark career path: excellent when healthy, but hard-pressed to stay healthy. 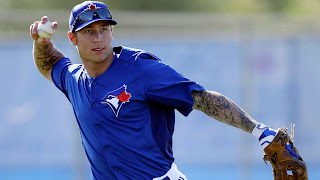 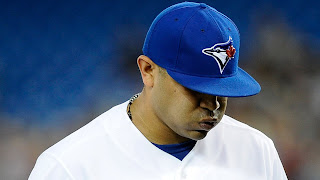 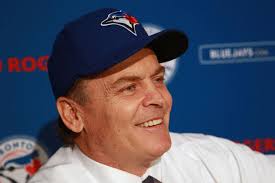 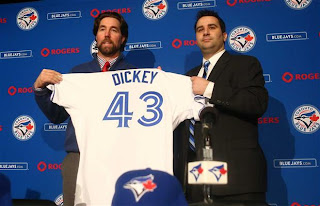 Wednesday, November 21, 2012
Quite the Week Now that Bud Selig has finally approved the largest trade in Blue Jays history, it's safe to reflect on the franchise makeover. There was never any real danger that MLB would void the trade, but taking a week to ruminate over it gave Selig the chance to "Tut, tut" the Marlins and throw Miami fans a bone that the commissioner is keeping a watchful eye on the team's fire-selling way (It also activated the latent Canadian paranoia in every Jays fan: "This never happens to the Yankees!!!") 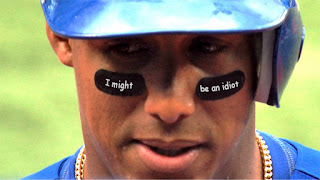