Could it be that the Jays were in the midst of a road trip pitting them against the top three pitching staffs in the league? In two parks that suppress offense only slightly less than Yosemite?

Nope. According to Tabler, Encarnacion is seeing fewer pitches to hit because Jose Bautista is out of the lineup. Like the Yeti and Loch Ness Monster before it, the myth of protection raises its ugly head. Sadly, it has just about as much basis in reality. 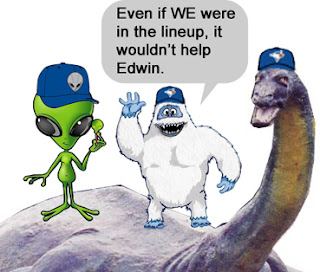 The primary flaw in this logic is that somehow it's ever in the pitcher's best interest to throw an accomplished hitter a whole bunch of hittable fastballs. It's easy to see how this myth came about, since pitchers do pitch around hitters - we've all been witness to the unintentional-intentional walk - but they do so very rarely and in situation-dependent circumstances, involving an open base, a pending bullpen matchup or Barry Bonds.

It just doesn't happen often enough to have any meaningful bearing on a player's numbers. To wit, here are Edwin Encarnacion's numbers coming into Tampa since Bautista went on the DL:


Or almost exactly what he was hitting BEFORE Bautista went on the DL.

What's really strange about Tabler's reasoning is that the protection argument is always that the player batting behind you is the one providing the protection. Jose Bautista has not batted behind Encarnacion ONCE this season, so if he's influencing Edwin's career year, he's doing it through some as-yet-undefined Jedi mind trick.


Jose Bautista can't get back into the Blue Jays lineup fast enough, but his presence has nothing to do with how Edwin Encarnacion is hitting or being pitched.