Toronto Baseball Guys
Thursday, August 23, 2007
Wes Littleton, bullpen hero The Texas Rangers beat the Baltimore Orioles 30-3 in the first game of a doubleheader last night. It was a great game for many Texas players to pad those stats - especially Wes Littleton, the relief pitcher who closed out the last 3 innings for the save. Yes, he saved a 27 run lead. In fairness it was merely an 11 run lead when he came in, so it was a lot closer than you'd think.

Nothing against Littleton at all, who pitched 3 scoreless innings and allowed only 3 baserunners. He was helped, however, by the fact that the Oriole hitters had trouble seeing the ball through their tears of shame.

Strike out the side with the bases loaded in a tie game? You get some high-fives. 3 innings in a blowout? Save! Ridiculous.  ¶ posted by Sean Doyle at 4:30 PM | 0 comments

Monday, August 13, 2007
Glavine WON'T Be The Last The popular sidebar story to Tom Glavine's 300th win was that he may be the last pitcher ever to accomplish the feat, what with 5-man rotations, specialty relievers and the adherence to pitch counts.

This is nothing new. I can recall reading an old Baseball Digest story that predicted the downfall of 300-game winners, going so far as to dismiss Nolan Ryan among a group of pitchers "too old and too far away" to reach the mark (Ryan retired with 324 wins). The prevailing theme of the article was that modern players made so much money there was no need for them to work all those years. Sound reasoning if the job in question is bomb disposal in a cactus mine, not so for Major League Baseball.

Stories of this kind used to be common whenever a major milestone was reached: Will this be the last 3,000 hit man? 500 HR hitter? These stories lost a little steam during the 90's, when it became apparent that a whole lot of guys were going to reach a whole lot of benchmarks.

Still, the whole "dying breed, last of his kind" angle has a certain nostalgic appeal. It also has the unfortunate quality of being woefully inaccurate, for a couple of reasons.

1. Forever is a long time. Sure, if they stop playing baseball in 2030, then maybe Glavine WILL be the last 300-game winner, but all signs point to the game being pretty healthy, and its just silly to start forecasting the careers of hundreds of players who haven't even stepped on the field yet.

2. Articles of this kind are great at tracking the changes in the game that have made such records so difficult, such as the pitch counts and the 5-man rotation, but they never seem to allow for future changes that might swing the pendulum in favour of the records becoming easier to reach. Maybe in 30 years we'll have Tommy John surgery in pill form, or 196-game schedules or a rover in the outfield. You just never know.

There are some compelling reasons to believe that there will be more 300-game winners:

Pitcher Health: the afore-mentioned TJ surgery has extended the careers of hundreds of pitchers by now, and is now routine. Shoulder surgeries are dicier propositions, but improving all the time. Young arms are now nursed along much more carefully than in year's past, and almost no pitcher is asked to throw more than 130 pitches in a start - a far cry from 30 years ago.

Graying of the Mound: On a related note, look at how many 40 year-olds have pitched in the majors this year:

And these aren't guys just hanging around in the back of a bullpen, these are all significant contributors on teams in contention. So why hang around this long?

Show me the money: The salaries cited by Baseball Digest have had the opposite effect. In a world in which Gil Meche lands $11 million per season, what sane human being who can still get people out would retire early? David Wells has said that someone will have to take the ball from his hand before he'll retire (that may have happened, as he's been released by the Padres).

Finally, the most compelling reason that more pitchers will win 300?

300 means something: Sam Rice retired with 2,987 hits, because the number 3000 just wasn't all that important. Now, milestones are hallowed, and unless a player simply runs out of gas and opportunities - like Fred McGriff and his 493 homers - he'll stick around until he makes it.

Johnson is 43 years old and is down with season - and possibly career - ending back surgery. His odds of a comeback are long, but he's just 16 shy of 300, and he was pitching effectively before he got hurt. If he wants to come back, there will be no shortage of teams willing to give him a shot.

Mussina is 38 and needs 53 more wins to reach 300. Pitching with the Yankees offense behind him, he doesn't need to be all THAT effective to pile up victories, and could get there in 4-5 seasons, if he wants to.

There's always the chance that he'll be surpassed in the rotation by younger, more capable arms, but as long as he doesn't suffer an injury or a sudden inability to get hitters out, Mussina could always price himself into the back of a rotation in a pitcher's park like San Diego or Los Angeles to pursue 300. While a 42-year-old starter used to be an anomaly in Major League Baseball, that's no longer the case - and that's why there will be more pitchers who clear the 300 win plateau.  ¶ posted by Jim Turner at 7:47 PM | 0 comments

Saturday, August 11, 2007
Jeter Revisited More than a year and a half after it was first posted, the Jeter List brought in a lot of traffic this week, thanks to being linked at Lawyers, Guns and Money, and by SI.com writer Pete McEntegart.

A couple of astute readers have pointed out that the logo on Jeter's wristband is not, in fact, Jeter himself, but Michael Jordan - as Jeter is part of Nike's "Jumpman" line. After finding a decent picture through Google images, it appears that they're right: 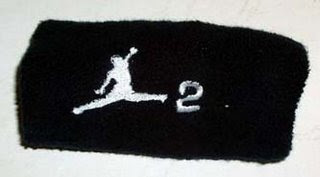 This is something of a lost opportunity for Nike - if Jeter is going to be one of their signature athletes, then his gear should bear that signature.

For example, let's take an image at random that's representative of Jeter on a baseball field... 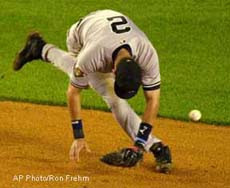 Then, just let the marketing wizards at Nike do their magic, and voila! 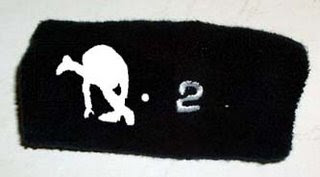 Now THAT's a wristband. Sadly, Nike chose to go in a different direction.

Since we want to avoid inaccuracy while impugning the ability of one of baseball's most popular players, that knocks the list down to a mere 99 reasons.

So the two wristband comments have been combined, and the list now has a brand new #6, inspired by the Yankees' latest trip to T.O.  ¶ posted by Jim Turner at 9:54 PM | 0 comments

Thursday, August 09, 2007
Cheater!!! Asterisk!!! Well, according to the NY Times, that Sadaharu Oh was nothing but a big cheater. And I quote:

"he hit most of his home runs using rock-hard, custom-made compressed bats, which were illegal in the major leagues when he played and were outlawed in Japanese baseball after he retired. A batter using a compressed bat, it was said at the time, could propel a ball farther than he can with an ordinary bat."

The article goes on to say that the compressed bats are seldom mentioned in Japan. Imagine that.

Anyhow, I think this makes Oh a dirty rotten cheater, and all of his records should be struck from the Japanese record books. I also think he should be scorned and mocked whenever possible. He has tainted the game, and nobody should like him. And I think his footwear should be analyzed too -- his cleats may have had extra support -- that's cheating too!

By the way. Congratulations Barry -- I stayed up past my bedtime to watch you go deep for the 756th time. You are now the king, and poor old noble Hank is now nothing but your bitch (better your bitch than Selig's I 'spose).

Sunday, August 05, 2007
Five Back Coming out of the All-Star Break, the Jays headed out on the road to play Boston and New York, a stretch during which it was widely agreed they had to make a run if they wanted to be relevant in the second half. They went 3-5 and that seemed to be the end of any post-season aspirations.

Except, they proceeded to win 5 of 6 from Seattle and Minnesota, both teams ahead of them in the Wild Card race. That set up another road trip to visit weak sisters Chicago and Tampa Bay, a stretch during which it was widely agreed they had to make a run if they wanted to be relevant in the second half. They went 2-4. Surely THAT was the end of any serious post-season aspirations.

Except, that all of the Wild Card leaders have been dealing with that title like a grenade with the pin out ("I don't want it, you take it!"). Now, after today's sweep of the Texas Rangers - to be filed under "About Damned Time" - the Blue Jays are 2 games clear of .500 and just 5 games out of the Wild Card.

Paradoxically, the Jays - a team that has repeatedly played themselves out of contention - find themselves, suddenly, in contention. Granted, there are a bunch of teams they have to climb over with only 53 games left on the schedule, but any team 5 games out with two months to play has to be in the playoff discussion.

Now, the Big Bad Yankees come to town, riding a hot streak and finally playing up to their potential, right? In reality, they've been fattening up their record by pounding the likes of Chicago, Tampa and Kansas City - something decent teams are supposed to do. The Yankees are always a dangerous team, but they'll find it much tougher to crank out 10 runs per game against the Jays pitching - currently 3rd in the AL (though one is less than sangiune about the chances of Mssrs. Towers and Litsch).

It's tempting to say that the Jays have to sweep to stay in contention, but we've been down that road before. In a league with no truly elite teams vying for the Wild Card, every team is one hot week away from the thick of the race. As a fan for whom expectations of October baseball should rightly have disappeared long ago, you just have to sit back and enjoy it.  ¶ posted by Jim Turner at 11:21 PM | 1 comments